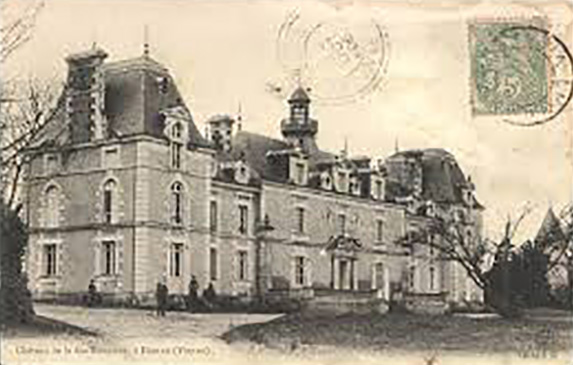 The domain, bordered by an old Roman road, is already mentioned in 1534 as a fief of the Baronie Mortemer. The Guillonnière forest covered more than 270 hectares in 1562 … History tells us that the beautiful Isabelle de Poitiers came to hunt in this forest, often presented as “Diane” or “Diana,
goddess of the hunt”.

A century later the owner, Jacques Audebert is Mayor of Poitiers. In the 18th century, La Guillonnière belonged to Michel Mathias, Antoine Pays-Mellier, Treasurer of France. In the 19th century, the Nicolas des Fossettes, de la Rinière and Collin de l’Hortet families owned them. At the end of the 19th century and the beginning of the 20th century, La Guillonnière was a farm dedicated to animal husbandry and viticulture. It is no longer in operation, but there are still beautiful outbuildings: stables, orangery, dovecote, barns and pigsty with great architectural harmony. During the Second World War, La Guillonnière experienced dark hours and became a headquarters for German officers. Practically uninhabited since the war, the Château de La Guillonnière has come back to life thanks to the current owners who have completely restored it.

When we leave the D2 between Fleuré and Vernon and enter the driveway towards La Guillonnière, we also return a bit in the time until 1850, the golden years of the domain. At the start of the 19th century, two wings were added to the hunting pavilion of the 16th and 17th centuries. Later, at the end of the century, two more symmetrical tower buildings were added, decorated in the style of Napoleon III. Just before, around 1838, the successful writer George Sand and Fréderic Chopin stayed there on their return from their trip to Mallorca.

De la Guillonnière is not an impressive castle, but a charming residence with beautiful surroundings. The forest and the fields, full of wild flowers, the castle and the outbuildings form a perfect whole. If you want to relax and enjoy the beauty of the castle and its surroundings, then you are in the right
place.